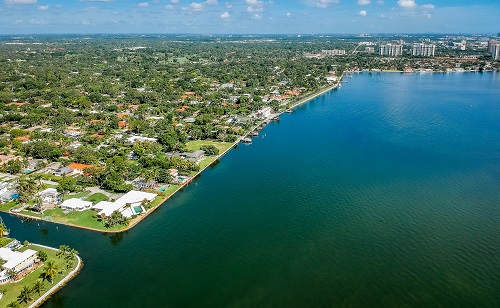 The South Florida land boom of the 1920s transformed the area into a fast paced town. The success of new developments created a demand for incorporation. On February 5, 1926, Arch Creek incorporated as the Town of Miami Shores, borrowing its name from a popular song and appealing to the image of Miami as paradise.  After World War I, a developer named L.T Cooper purchased property in the area with the intent to market it as the Bay View Estates.

Miami Shores is located near the north edge of downtown Miami and reasonably close to the beaches and the Miami International Airport. In 2003, the estimated population of the village was 10,200 residents. The community is mainly composed of single-family homes that exhibit the distinct architectural style of the Mediterranean Revival.

Miami Shores’ officials and residents adhere to a strict building and zoning code. The Village’s government officials believe that strict zoning and building codes help protect home values and maintain their reputation as a neat and attractive community.

In 1989, Miami Shores received recognition as a Tree City USA. Residents of Miami Shores enjoy a number of activities in the neighborhood. Many of the activities take place at the Village’s privately owned country club. Residents also have access to the Miami Shores Aquatic Center and the Shores Center for Performing Arts. The Village offers several programs that are geared towards the children who reside in Miami Shores. Barry University, the largest Catholic university in the Southeast United States is located in heart of Miami Shores.
From 1986 to 1994, Miami Shores was limiting public access to residential areas by closing off throughways, creating cul-de-sacs.  Proponents of the practice cited the barriers of use in limiting crime and opponents criticized the gated community as segregationist.  The barriers have remained as permanent fixtures though their effect is less obviously obtrusive to public sensibilities as well as crime rates.